Discover a region of Turkey where you will find the olive trees, vineyards and beautiful forests, by the fantastic blue and limpid Egean Sea.

We propose you to enjoy during your vacation, both the cultural face and the natural and relaxing face of the region.

Depart from the traces of the history, visit the numerous antique sites of which the most famous are Ephesus and Pergamon.

Along the seaside trip of great sand beaches, you will come across a beautiful landscape. The ancient site of Aphrodisias which lies in the Maeander River basin, in a fertile valley 100 miles southeast of the port of Izmir remains to be one of the most important archaeological sites of the Greek and Roman periods in Turkey.

Region still green and savage in the north, Egean coast boasts many different beaches one of the them is worldwide known with fanciest bars and clubs namely Bodrum considered as Turkish St Tropez.

Day 1: – Istanbul
Arrival to Istanbul–Transfer to the hotel: Presentation & Orientation of the city on the road. First discovery of the Sultanahmet area.

Day 2: Istanbul
Departing from traditional way, for the discovery of Phanar (Fener) neighbourhood and district of Eyüp alongside of Golden Horn. Lets start from visiting St sauveur in Chora- jewel of the site with its brightness and freshness of its interior decoration, mosaics and paintings.

Day 3: Istanbul – Bursa
Day complete dedicated to the discovery of historical heritage of the city, visit of Sultanahmet in the company of a professional guide. In the scope of the program, ancient residence of the Sultans – <<Topkapi Palace>>. Collections of Porcelaines and Jewelleries.

Mosque/Church of Sainte Sophie, constructed in 6th Century –unique architecture and largest in the world, place of hippodrome.

Grande mosque, ostentatious, a original monument with 20 small cupolas, while the Green Mosque presents A a plan of T form reverted of characteristic first Ottomans sanctuaries.

Day 5: Canakkale – Pergame – Selcuk
Visit of Museum of Archéology in Canakkale, will expose a rich collcetion of objects refound on the Troy Site.

Day 6: Ephèse
On the way to Selçuk (Ephèsus), we will commence by the visit of Virgin’s House on the mountain Aladağ. And then we will discover one of the historical sites well preserved with its temple, one of the seven wonders of the Universe Temple of Artemis

Day 7: Selcuk – Pamukkale
On the way to Pamukkale, stop by Aphrodisias, site dedicated to the Goddess of Love and Fertility Constructed in the foot BABA Mountain (2308m), covered bythe snow almost all year, situated in the middle of olive and pine trees. 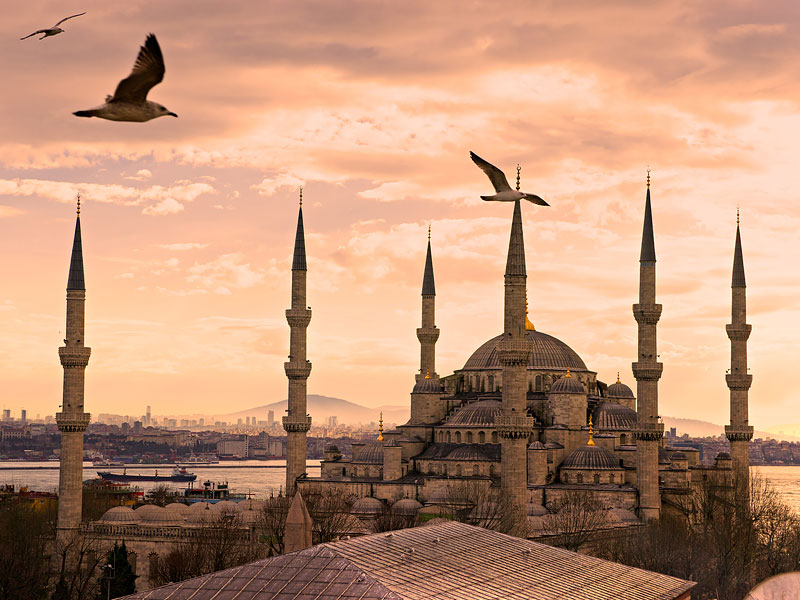 Prices Include Prices do not include